Well, not quite, but... CBS news and the Times of London are reporting that the United States is planning on building a new $1 billion embassy in London, surrounded by a moat (for security)! 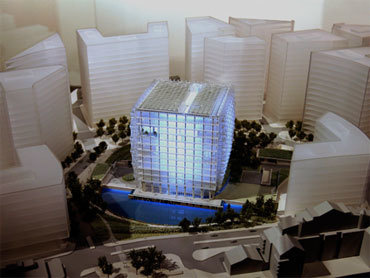 The United States has unveiled plans for its new $1 billion high-security embassy in London — the most expensive it has ever built.

The new embassy, on a former industrial site behind Battersea power station... surrounded by a moat, will be built.

A moat 30 metres (100ft) wide and rolling parkland will separate the building from the main road, protecting it from would-be bombers and removing the need for the blast barriers that so dismayed the people of Mayfair.

But the price puts the London embassy above the US’s most fortified missions, including the Baghdad embassy, which cost $600 million (£390 million) but required a further $100 million of work on air conditioning, and the Islamabad embassy, still under construction, which has cost more than $850 million.

US diplomats add a moat to their expenses at $1bn London embassy, The Times of London, Catherine Philp, February 24, 2010, http://www.timesonline.co.uk/tol/news/uk/article7038550.ece.

While millions of Americans are unemployed, the U.S. State Department is okay spending $1 billion to replace an embassy. Moral of the story? When you get into deep credit card debt, borrow more money to build a moat around your house (perhaps to protect yourself from frothing creditors?).

By the way, where's the trebuchet?!