When pressed on whether he viewed the invasion of Iraq as illegal, he said: "Yes, if you wish. I have indicated it was not in conformity with the UN charter from our point of view, from the charter point of view, it was illegal."

Two most senior law officials state that Britain's decision to go to war in Iraq was illegal.

The war in Iraq had "no basis in international law", a Dutch inquiry found today, in the first ever independent legal assessment of the decision to invade.

In a series of damning findings, a seven-member panel in the Netherlands concluded that the war, which was supported by the Dutch government following intelligence from Britain and the US, had not been justified in law.

"The Dutch government lent its political support to a war whose purpose was not consistent with Dutch government policy," the inquiry in the Hague concluded. "The military action had no sound mandate in international law."

The charges in the Indictment that the defendants planned and waged aggressive wars are charges of the utmost gravity. War is essentially an evil thing. Its consequences are not confined to the belligerent states alone, but affect the whole world.

The central crime in this pattern of crimes, the kingpin which holds them all together, is the plot for aggressive wars.

Military action was now seen as inevitable. Bush wanted to remove Saddam, through military action, justified by the conjunction of terrorism and WMD. But the intelligence and facts were being fixed around the policy. The NSC had no patience with the UN route, and no enthusiasm for publishing material on the Iraqi regime's record. There was little discussion in Washington of the aftermath after military action.

The Foreign Secretary said he would discuss this with Colin Powell this week. It seemed clear that Bush had made up his mind to take military action, even if the timing was not yet decided. But the case was thin. Saddam was not threatening his neighbours, and his WMD capability was less than that of Libya, North Korea or Iran. We should work up a plan for an ultimatum to Saddam to allow back in the UN weapons inspectors. This would also help with the legal justification for the use of force.

The Attorney-General said that the desire for regime change was not a legal base for military action. There were three possible legal bases: self-defence, humanitarian intervention, or UNSC authorisation. The first and second could not be the base in this case. Relying on UNSCR 1205 of three years ago would be difficult. The situation might of course change.

As of January 16, 2010, a documented ~100,000 "violent civilian deaths have resulted from the 2003 military intervention in Iraq. [IBC's] public database includes deaths caused by US-led coalition forces and paramilitary or criminal attacks by others... IBC’s documentary evidence is drawn from crosschecked media reports of violent events leading to the death of civilians, or of bodies being found, and is supplemented by the careful review and integration of hospital, morgue, NGO and official figures." 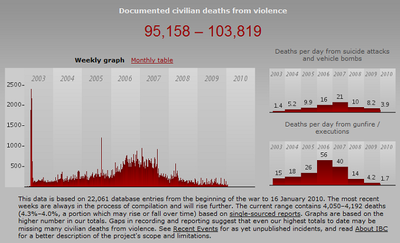 Iraq government estimates 5 million children orphaned since the start of the war: http://www.alternet.org/world/70886/?page=entire.