About 700 bicyclists die every year in the U.S., and increased helmet usage has not reduced rates of death or head injuries.

Millions of parents take it as an article of faith that putting a bicycle helmet on their children, or themselves, will help keep them out of harm's way. But new data on bicycle accidents raises questions about that. The number of head injuries has increased 10 percent since 1991, even as bicycle helmet use has risen sharply... But given that ridership has declined over the same period, the rate of head injuries per active cyclist has increased 51 percent just as bicycle helmets have become widespread.

Many specialists in risk analysis argue that... the increased use of bike helmets may have had an unintended consequence: riders may feel an inflated sense of security and take more risks.

One parallel, risk experts said, is anti-lock brakes. When they were introduced in the 1980's, they were supposed to reduce accidents, but government and industry studies in the mid-1990's showed that as drivers realized their brakes were more effective they started driving faster, and some accident rates rose.

Insurance companies have long been familiar with the phenomenon, which they call moral hazard. Once someone is covered by an insurance policy there is a natural tendency for that person to take more risks. Companies with workers' compensation insurance, for instance, have little incentive to make their workplaces safer. To counter such moral hazard, insurers may give discounts to companies that reduce hazardous conditions in their factories, said Robert Hartwig, chief economist for the Insurance Information Institute. ''People tend to engage in risky behavior when they are protected,'' he said. ''It's a ubiquitous human trait.''

The most effective way to reduce severe head injuries may be to decrease the number of accidents in the first place. 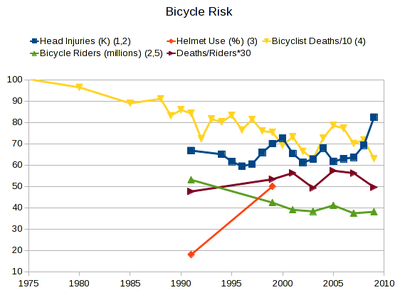 As helmet usage went up, deaths (per riders) went up. Either helmet usage increases risky riding and/or there are more important things such as riding at night, in urban areas, age, etc.

The bicycle study documented the large number of bicycle-related injuries and deaths that occur every year, and evaluated the use and hazard patterns of bicyclists in the United States... the bicycle study does not indicate any simple or direct remedies to the hazards of bicycle riding.

A large proportion of bicycle injuries result from behaviors which are risky or reflect poor riding judgement (e.g., stunting or riding too fast given the riding conditions). In addition, the cognitive and physical immaturities of children are likely contributing factors in many of their injuries. The bicycle study also found that environmental factors, such as riding terrain and riding conditions, play an important role in the injury risk. On the other hand, while poor bicycle maintenance was a hazard factor, the structure of the bicycle itself appeared to play little role in the injury risk.