According to 2008/2009 BLS.gov and BEA.gov statistics, as compared to a private sector employee, the average local/state government employee (20 million of them, costing $1.1 trillion per year) makes $12 more per hour ($68,000/year versus $60,000/year), has twice the benefits, works 12% less hours, retires earlier, has a 66% less chance of being laid off, rarely gets fired for poor performance or for cost cutting, is being paid sufficiently (66% less voluntary quit rate), has a 5 times greater chance of entering a protective union, and doesn't worry about collecting benefits since the employer (the government) will tax/borrow/inflate to cover unfunded liabilities.

Moreover, state and local government debt has doubled in the last 10 years, partly to cover these costs. Future liabilities are currently underfunded by at least $1 trillion, but some estimates are $3 to $4 trillion. Public pension plans use very optimistic assumptions which Warren Buffett has called "accounting nonsense." 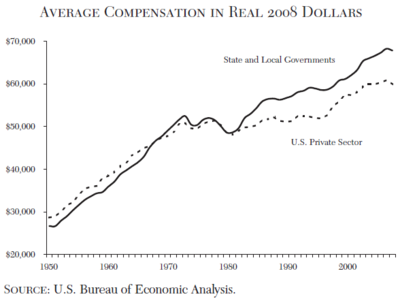 (Compensation includes wages and benefits, such as the costs of health care and pensions, in constant 2008 dollars, deflated by the consumer price index)

The BEA data break down the public sector workforce into three groups: education, public enterprises (such as government liquor stores), and all other government functions. The long-term compensation trends in the three groups have been similar.

But state and local pension and retiree health plans are, in aggregate, hugely underfunded, as discussed below. Thus, these data understate the level of benefits that state and local workers are currently accruing.

In June 2009, total compensation per hour was $39.66 in the public sector, which was 45 percent greater than the average $27.42 per hour in the private sector. The public sector advantage in average wages was 34 percent, while the advantage in benefits was a huge 70 percent.

Public sector retirement plans are usually more generous than those in the private sector. The annual benefit of the median public sector defined-benefit pension is more than twice the benefit in the median private plan (Pew 2007: 11).

Aside from all these monetary benefits of public sector employment, there is one very important nonmonetary benefit of working for the government: very high job security. During good times and bad, BLS data show that “layoffs and discharges” in the public sector occur at just one-third the rate as in the private sector (BLS 2009e). Public sector workers rarely get fired for poor performance or laid off because of employer cost-cutting, but those events occur frequently in the private sector.

Finally, there is a very good market indicator of the generosity of compensation in the public sector: voluntary job-quit rates. If an industry has a low quit rate, it indicates that compensation is more than adequate to attract qualified workers. The BLS (2009e) has data on employee quit rates across industries, and over the years the quit rate among public sector workers has been just one-third the quit rate in the private sector.

In 2008, 38.5 percent of all state and local workers were members of unions, which is five times the union share in the U.S. private sector of 7.6 percent. 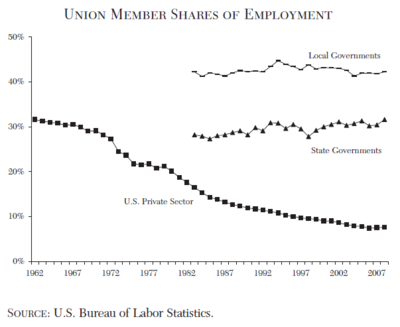 In the Pacific region, public sector workers are paid an average $49.02 per hour, which is 60 percent greater than the $30.73 paid in the West South Central region.

California tops the ranking with average public sector compensation of $86,417, which was 64 percent higher than average compensation in the bottomranked state of Kentucky.

Given that average public sector compensation in 2008 was $56,040 in this BEA dataset.

State and local debt outstanding soared from $1.2 trillion in 2000 to $2.3 trillion in 2009—a 92 percent increase (Federal Reserve Board 2009: Table D.3). Governments are increasingly using debt to fund investments that used to be funded on a pay-as-you-go basis, and some governments are using debt to cover routine operating costs. Rising debt levels will make future state and local budgeting that much more difficult.

Officially, state pension plans are currently underfunded by about $1 trillion and many have funding levels far below the lowest level considered adequate of 80 percent (The Economist 2009).

A recent study by Robert Novy-Marx and Joshua Rauh (forthcoming) found that state and local governments are “severely underestimating” their future pension liabilities by using high discount rates. Using more realistic assumptions, the authors found that at the end of 2008, state and local pension plans were underfunded by $3.2 trillion, or three times more than the officially reported amount. That represents a shortfall of $21,500 for every U.S. household according to the authors, indicating the possible exposure to taxpayers if these plans are not cut.

Most state and local governments provide health care coverage to retired employees, but these plans are typically completely unfunded. In other words, they have not put any assets aside to cover future benefits. My colleague Jagadeesh Gokhale and I have estimated that these unfunded health care obligations total at least $1.4 trillion nationwide (Edwards and Gokhale 2006).

Americans need higher-quality government services at lower cost to avert a fiscal crisis in state and local governments. Public sector compensation—and benefit plans in particular—need to be overhauled to ensure financial sustainability. And the whole area of public sector unionism needs to be reexamined given the need for greater flexibility and more restraint in public finances.