It's good to live in a liberal democracy

It's good to live in a liberal democracy

Democide (n): the murder of any person or people by a government.

My conclusion is that the diverse tests are positive and robust, that the less liberal democracy and the more totalitarian a regime, the more likely it will commit democide. The closer to absolute power, the more a regime's disposition to murder one's subjects or foreigners multiplies. As far as this work is concerned, it is empirically true that Power kills, absolute Power kills absolutely.

Shocking statistic: From 1900-1999, governments killed 262 million of their own people:

Just to give perspective on this incredible murder by government, if all these bodies were laid head to toe, with the average height being 5', then they would circle the earth ten times. Also, this democide murdered 6 times more people than died in combat in all the foreign and internal wars of the century. Finally, given popular estimates of the dead in a major nuclear war, this total democide is as though such a war did occur, but with its dead spread over a century. 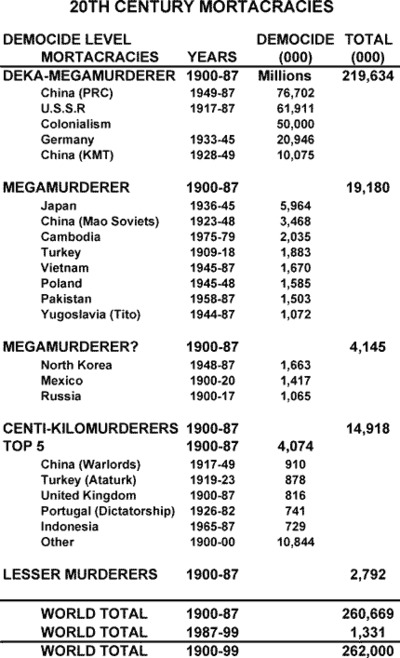 Interesting statistic: War consistently kills less than 2% of the population every year (http://www.hawaii.edu/powerkills/SOD.TAB2.2.GIF).

...both World Wars cost twenty-four million battle deaths. But from 1918 to 1953, the Soviet government executed, slaughtered, starved, beat or tortured to death, or otherwise killed 39,500,000 of its own people (my best estimate among figures ranging from a minimum of twenty million killed by Stalin to a total over the whole communist period of eighty-three million). For China under Mao Tse-tung, the communist government eliminated, as an average figure between estimates, 45,000,000 Chinese. The number killed for just these two nations is about 84,500,000 human beings, or a lethality of 252 percent more than both World Wars together.

In any case, we can still see from the table that the more freedom in a nation, the fewer people killed by government. Freedom acts to brake the use of a governing elite's power over life and death to pursue their policies and ensure their rule.

In light of all this, the peaceful, nonviolent, pursuit and fostering of civil liberties and political rights must be made mankind's highest humanitarian goal. Not simply to give the greatest number the greatest happiness, not simply to obey the moral imperative of individual rights, not simply to further the efficiency and productivity of a free society, but also and mainly because freedom preserves peace and life.

Thus, I believed that Mao's policies were responsible for the famine, but he was misled about it, and finally when he found out, he stopped it and changed his policies. Therefore, I argued, this was not a democide. Others, however, have so counted it, but I thought this was a sloppy application of the concepts of mass murder, genocide, or politicide (virtually no one used the concept of democide). They were right and I was wrong.

From the biography of Mao, which I trust (for those who might question it, look at the hundreds of interviews Chang and Halliday conducted with communist cadre and former high officials, and the extensive bibliography) I can now say that yes, Mao's policies caused the famine. He knew about it from the beginning. He didn't care! Literally. And he tried to take more food from the people to pay for his lust for international power, but was overruled by a meeting of 7,000 top Communist Party members.

So, the famine was intentional. What was its human cost? I had estimated that 27,000,000 Chinese starved to death or died from associated diseases. Others estimated the toll to be as high as 40,000,000. Chang and Halliday put it at 38,000,000, and given their sources, I will accept that.

Russians murdered by the Soviet regime:

A: This figure of 20,000,000 is from Robert Conquest’s The Great Terror, and is for the 1930s. Independently, I come up with near the same total for those years. However, when you include Stalin’s democide during and after WWII and until his death in 1953, the total for him rises to about 42,000,000. Then there is the democide of Lenin (about 4,000,000) that in the years before Stalin rose to absolute power, and that of those who followed Stalin to power. Moreover, the 62,000,000 total democide takes into account the foreign democide of Poles, Hungarians, Rumanians, Bulgarians, Germans, and so on, amounting to about 7,000,000.