An article by Lew Rockwell of the Mises Institute in 2004 on the way mainstream Republicans lull libertarian and independent minded peoples from positive ideas of freedom and liberty into negative ideas of anti-leftist fascism (where fascism is defined as basically a militaristic, nationalistic, idolatrous corporatism). A great example is the Tea Party "Movement," first started by Ron Paul's 2008 Presidential Campaign, and subsequently [hijacked](http://www.salon.com/news/opinion/glenn_greenwald/2010/02/07/palin/index.html), [co-opted](http://www.politico.com/news/stories/0310/33866.html), and [distorted](http://www.salon.com/opinion/greenwald/2010/02/21/libertarianism/index.html) by the mainstream Republican neo-Fascists.

The most significant socio-political shift in our time has gone almost completely unremarked, and even unnoticed. It is the dramatic shift of the red-state bourgeoisie from leave-us-alone libertarianism, manifested in the Congressional elections of 1994, to almost totalitarian statist nationalism. Whereas the conservative middle class once cheered the circumscribing of the federal government, it now celebrates power and adores the central state, particularly its military wing.

This huge shift has not been noticed among mainstream punditry, and hence there have been few attempts to explain it – much less have libertarians thought much about what it implies. My own take is this: the Republican takeover of the presidency combined with an unrelenting state of war, has supplied all the levers necessary to convert a burgeoning libertarian movement into a statist one.

Rothbard said, two errors rear their head in most every revolution. First, the reformers do not move fast enough; instead they often experience a crisis of faith and become overwhelmed by demands that they govern "responsibly" rather than tear down the established order. Second, the reformers leave too much in place that can be used by their successors to rebuild the state they worked so hard to dismantle. This permits gains to be reversed as soon as another party takes control...

In the last years of the 1990s, the GOP-voting middle class refocused its anger away from government and leviathan and toward the person of Bill Clinton. It was said that he represented some kind of unique moral evil despoiling the White House. That ridiculous Monica scandal culminated in a pathetic and pretentious campaign to impeach Clinton. Impeaching presidents is a great idea, but impeaching them for fibbing about personal peccadilloes is probably the least justifiable ground. It's almost as if that entire campaign was designed to discredit the great institution of impeachment.

In any case, this event crystallized the partisanship of the bourgeoisie, driving home the message that the real problem was Clinton and not government; the immorality of the chief executive, not his power; the libertinism of the left-liberals and not their views toward government. The much heralded "leave us alone" coalition had been thoroughly transformed in a pure anti-Clinton movement. The right in this country began to define itself not as pro-freedom, as it had in 1994, but simply as anti-leftist, as it does today.

There are many good reasons to be anti-leftist, but let us revisit what Mises said in 1956 concerning the anti-socialists of his day. He pointed out that many of these people had a purely negative agenda, to crush the leftists and their bohemian ways and their intellectual pretension. He warned that this is not a program for freedom. It was a program of hatred that can only degenerate into statism:

The moral corruption, the licentiousness and the intellectual sterility of a class of lewd would-be authors and artists is the ransom mankind must pay lest the creative pioneers be prevented from accomplishing their work. Freedom must be granted to all, even to base people, lest the few who can use it for the benefit of mankind be hindered. The license which the shabby characters of the quartier Latin enjoyed was one of the conditions that made possible the ascendance of a few great writers, painters and sculptors. The first thing a genius needs is to breathe free air.

He goes on to urge that anti-leftists work to educate themselves about economics, so that they can have a positive agenda to displace their purely negative one. A positive agenda of liberty is the only way we might have been spared the blizzard of government controls that were fastened on this country after Bush used the events of 9-11 to increase central planning, invade Afghanistan and Iraq, and otherwise bring a form of statism to America that makes Clinton look laissez-faire by comparison. The Bush administration has not only faced no resistance from the bourgeoisie, it has received cheers. And they are not only cheering Bush's reelection; they have embraced tyrannical control of society as a means toward accomplishing their anti-leftist ends. 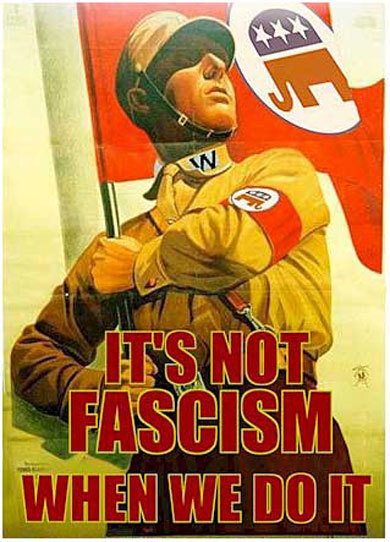 After September 11, even those whose ostensible purpose in life is to advocate less government changed their minds. Even after it was clear that 9-11 would be used as the biggest pretense for the expansion of government since the stock market crash of 1929, the Cato Institute said that libertarianism had to change its entire focus: "Libertarians usually enter public debates to call for restrictions on government activity. In the wake of September 11, we have all been reminded of the real purpose of government: to protect our life, liberty, and property from violence. This would be a good time for the federal government to do its job with vigor and determination."

The vigor and determination of the Bush administration has brought about a profound cultural change, so that the very people who once proclaimed hatred of government now advocate its use against dissidents of all sorts, especially against those who would dare call for curbs in the totalitarian bureaucracy of the military, or suggest that Bush is something less than infallible in his foreign-policy decisions. The lesson here is that it is always a mistake to advocate government action, for there is no way you can fully anticipate how government will be used. Nor can you ever count on a slice of the population to be moral in its advocacy of the uses of the police power.

If you follow hate-filled sites such as Free Republic... The militarism and nationalism dwarfs anything I saw at any point during the Cold War. It celebrates the shedding of blood, and exhibits a maniacal love of the state.

Along with this goes a kind of worship of the presidency, and a celebration of all things public sector, including egregious law like the Patriot Act, egregious bureaucracies like the Department of Homeland Security, and egregious centrally imposed regimentation like the No Child Left Behind Act. It longs for the state to throw its weight behind institutions like the two-parent heterosexual family, the Christian charity, the homogeneous community of native-born patriots.

Paul Craig Roberts is right: "In the ranks of the new conservatives, however, I see and experience much hate. It comes to me in violently worded, ignorant and irrational emails from self-professed conservatives who literally worship George Bush. Even Christians have fallen into idolatry. There appears to be a large number of Americans who are prepared to kill anyone for George Bush." Again: "Like Brownshirts, the new conservatives take personally any criticism of their leader and his policies. To be a critic is to be an enemy."

In short, what we have alive in the US is an updated and Americanized fascism. Why fascist? Because it is not leftist in the sense of egalitarian or redistributionist. It has no real beef with business. It doesn't sympathize with the downtrodden, labor, or the poor. It is for all the core institutions of bourgeois life in America: family, faith, and flag. But it sees the state as the central organizing principle of society, views public institutions as the most essential means by which all these institutions are protected and advanced, and adores the head of state as a godlike figure who knows better than anyone else what the country and world's needs, and has a special connection to the Creator that permits him to discern the best means to bring it about.

The American right today has managed to be solidly anti-leftist while adopting an ideology – even without knowing it or being entirely conscious of the change – that is also frighteningly anti-liberty. This reality turns out to be very difficult for libertarians to understand or accept. For a long time, we've tended to see the primary threat to liberty as coming from the left, from the socialists who sought to control the economy from the center. But we must also remember that the sweep of history shows that there are two main dangers to liberty, one that comes from the left and the other that comes from the right. Europe and Latin America have long faced the latter threat, but its reality is only now hitting us fully.

What is the most pressing and urgent threat to freedom that we face in our time? It is not from the left. If anything, the left has been solid on civil liberties and has been crucial in drawing attention to the lies and abuses of the Bush administration. No, today, the clear and present danger to freedom comes from the right side of the ideological spectrum, those people who are pleased to preserve most of free enterprise but favor top-down management of society, culture, family, and school, and seek to use a messianic and belligerent nationalism to impose their vision of politics on the world.

There is no proxy for liberty, no cause that serves as a viable substitute, and no movement by any name whose success can yield freedom in our time other than the movement of freedom itself. We need to embrace liberty and liberty only, and not be fooled by groups or parties or movements that only desire a temporary liberty to advance their pet interests.

An example was James Adkisson who was sentenced to life in prison for killing 2 and injuring 7 at a Knoxville, Tennessee Unitarian Universalist Church on July 27, 2008. Here is a letter about his pre-meditated killings: http://web.knoxnews.com/pdf/021009church-manifesto.pdf.

The desire for power frequently begets petty hypocrisy, which is among the world's most tragically abundant resources. Just as many of yesterday's leftist dissidents now treat political nonconformity as a species of treason, many of those who denounce the current president as a domestic enemy would have considered such rhetoric a Gitmo-worthy offense just a few years ago.

The problem here, of course, is that both sides in this manufactured conflict are manipulated by power-obsessed people into defining the enemy in "horizontal" rather than "vertical" terms; that is, the real threat consists of "those people" over there, rather than those who presume to exercise power over all of us. Rather than seeking an end to the Leviathan State, each side seeks to control its coercive appendages while protecting its own interests in the cynical and entirely misplaced confidence that the powers they surrender to the state today won't be pitilessly deployed against them tomorrow.