As noted by Paul Krugman, most of the mortgage securitization (subprime, adjustable rate, jumbo, and option ARM) that spawned the collapse of 2008 was led by non-Government entities. However, all of these instruments were a function of low interest rates-- i.e. they couldn't have existed or have been profitable without them. That doesn't excuse the fraud and banksterism that occurred, but crazy things happen when you flood a market with fake money. Subprime is now back to 20%, this time fully backed by the government and the government now owns or securitizes more than 95% of the whole mortgage market.

Beginning in the middle of 2007... Figure 3 shows dramatic declines during this time in both non-agency securitization and originations of loans retained in the lending institution's portfolio. In the present day, when Ginnie Mae's activities are included, the three GSEs are providing unprecedented support to the housing market—owning or guaranteeing almost 95% of the new residential mortgage lending.

This shift in mortgage finance has had a profound impact on the types of borrowers receiving loans. In the fourth quarter of 2006, approximately 10% of originations in our sample were labeled by originators as "subprime." For the entire universe of mortgages, subprime loans are estimated to have made up about 20% of originations in 2006. By the first quarter of 2008, the subprime share was effectively zero. Since then, increased FHA lending—identified here by Ginnie Mae's share—has revived this segment of the market. After plummeting in early 2008, the share of borrowers with FICO credit scores lower than 660 has returned to just higher than 20%, the same share as when subprime securitization peaked in 2006.

With the vast majority of current mortgage lending now intermediated in some form by the GSEs, it will be difficult for the housing market to return to normal. 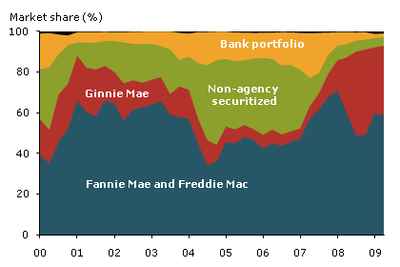 This is a market purely on life support, sustained by the federal government...

Having FHA do this much volume is a sign of a very sick system.

One does not need to rely on the Taylor rule to conclude that from the perspective of many of the standard objective functions that monetary policy might seek to optimize, rates were held too low for too long. The real interest rate was negative for a very long period, similar to what happened in the 1970s. The intervention was an intentional departure from a policy approach that was followed in the decades before. The Fed’s statements that interest rates would be low for a “prolonged period” and that interest rates would rise at a “measured pace” is evidence of these intentions.

The low interest rates added fuel to the housing boom, which in turn led to risk taking in housing finance and eventually a sharp increase in delinquencies, foreclosures, and the deterioration of the balance sheets of many financial institutions as toxic assets grew rapidly. To test the connection between the low interest rates and the housing boom I built a simple model relating the federal funds rate to housing construction. My research showed that a higher federal funds rate would have avoided much of the boom and bust.