According to United Nations population projections, world population will rise to an estimated 8 to 12 billion humans in 2050. Interestingly, in the "low" estimate, it will not only start to taper off, but it will actually start to decline (due to decreasing fertility)! 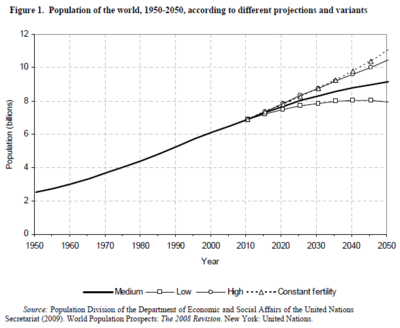 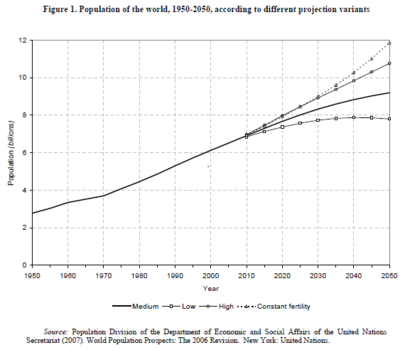 According to the 2008 Revision of the official United Nations population estimates and projections, the world population is projected to reach 7 billion in late 2011, up from the current 6.8 billion, and surpass 9 billion people by 2050 (figure 1).

Most of the additional 2.3 billion people will enlarge the population of developing countries, which is projected to rise from 5.6 billion in 2009 to 7.9 billion in 2050, and will be distributed among the population aged 15-59 (1.2 billion) and 60 or over (1.1 billion) because the number of children under age 15 in developing countries will decrease.

In contrast, the population of the more developed regions is expected to change minimally, passing from 1.23 billion to 1.28 billion, and would have declined to 1.15 billion were it not for the projected net migration from developing to developed countries, which is projected to average 2.4 million persons annually from 2009 to 2050...

In the more developed regions, children and youth account for just 17 per cent and 13 per cent of the population, respectively, and whereas the number of children is expected to change little in the future, remaining close to 200 million, the number of young people is projected to decrease from 163 million currently to 134 million in 2050...

Furthermore, the implications of population ageing cannot be dismissed. In the more developed regions, the population aged 60 or over is increasing at the fastest pace ever (growing at 2.0 per cent annually) and is expected to increase by more than 50 per cent over the next four decades, rising from 264 million in 2009 to 416 million in 2050...

The fall in the birth rate is a largely voluntary phenomenon. It has happened just as fast in countries with no coercive population policy as it has in China, with its Draconian two-child law. The demands for coercion that were common in the 1970s—"Why should the law not be able to prevent a person from having more than two children?" wrote Paul Ehrlich, Anne Ehrlich and John Holdren in 1977—seem embarrassing in retrospect.