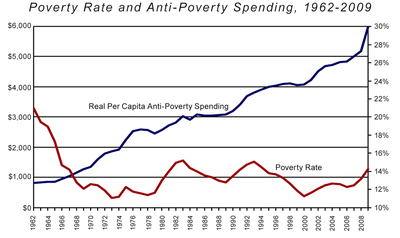 In 2007, the last year not significantly affected by the Great Recession, the federal government spent about $1.45 trillion (roughly half of its total spending) on programs aimed at redistributing income from more wealthy Americans to the less wealthy.

The poverty rate declined significantly between 1959 and 1964 as the overall economy grew, but this was before the launch of President Lyndon Johnson's War on Poverty (and therefore before the enactment of Medicaid and Medicare, two of the largest anti-poverty programs in existence today). Between 1966 and 2009, the poverty rate fluctuated with the business cycle but showed little downward trend, even as anti-poverty spending grew by a factor of six in real terms. In other words, our anti-poverty programs have been implemented at enormous and ever-increasing cost — and it is not clear that they have done much to reduce the rate of poverty. 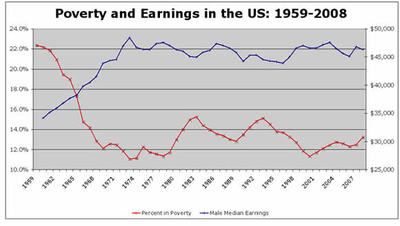 Perhaps the biggest reason why poverty declined from the 1950s through the mid–1970s was the steady increase in earnings (adjusted for inflation). The following table shows vividly how the two trends—poverty falling, earnings rising—tracked each other.

Many researchers believe that the official method of measuring poverty is flawed. Some argue that poverty is a state of relative economic deprivation, that it depends not on whether income is lower than some arbitrary level but on whether it falls far below the incomes of others in the same society. But if we define poverty to mean relative economic deprivation, then no matter how wealthy everyone is, there will always be poverty. Others point out that the official measure errs by omission. For example, official poverty figures take no account of refundable tax credits or the value of noncash transfers.

Another criticism of the poverty measures is that they are based on income rather than on consumption. Consumption spending may be a better measure of well-being than reported income is, although data from the consumer expenditure survey have their own limitations. Daniel Slesnick found, using consumption spending, that the poverty rate fell from 31 percent in 1949 to 13 percent in 1965 and to 2 percent at the end of the 1980s. One rough indicator of the decline in poverty is the range of items that most poor homes now contain—from color TVs to VCRs to washing machines to microwaves—compared with the relative lack of these items in poor homes in the early 1970s.