The part where police deny the ambulance and strangers come to help is touching. 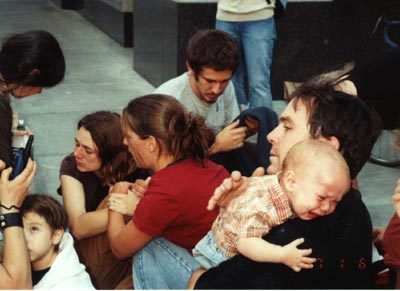 First and foremost I want to thank from the bottom of my heart the kind humanbeings who helped my children, my wife and me after we were pepper sprayed by the Portland Police. We were aided immediately by fellow demonstrators, the black cross and passers-by caught in the crossfire. These people shielded us with their bodies and soothed us with their treatments and words, and argued with police, putting themselves in danger, to secure our safe passage through the cordon. Their actions stand in beautiful contrast to the savage inhumanity of the police.

We brought our children to a peaceful protest, we stayed in the back and we were walking on the sidewalk. The march stopped at the intersection of 2nd and Alder we could not see why from our position on the SW corner of the intersection. Police quickly moved up behind us and a moment or two later sprayed pepper spray into the crowd from the NE corner of the intersection. the crowd ran toward us to escape the spray. We asked the oficer closest to us how we should exit the intersection. He pointed and said to exit to the NE, into the spraying police opposite him. as the crowd pressed toward us I yelled to him to let us through (south on 2nd) because we had three small children. He looked at me, and drew out his can from his hip and sprayed directly at me. I was at an angle to him and the spray hit my right eye and our three year-old who I was holding in my right arm. In the same motion he turned the can on my wife who was holding our 10 month old baby and doused both of their heads entirely from a distance of less than 3 feet. my six year old daughter was holding my left hand and was not hit directly. We ended up on the sidewalk a few feet down alder with fellow protesters holding my screaming children and and pouring water on our eyes. Someone yelled that the police had said that we could pass through the cordon on alder with the children. I picked up the baby and other protesters brought my wife and other children to the police line. We attempted to pass through but they leaned in shoulders to block us. I yelled at them to let us pass for about two minutes and finally some officer up the line nodded me and the baby through. they were not going to let my wife and other children out but after a few minutes of pleading from the crowd and another signal from up the line they let them out. As we passed the officers were laughing and said something to the effect of "thats why you shouldn't bring kids to protests".

I immediatly called 911 as we moved up to the corner of 3rd and alder. I explained that a baby had been directly pepper sprayed and that I needed an ambulance. They informed me that they would not send one and that all protesters were to report to a first aid tent on the other side of the police lines. Fellow protestors aided us until Black Cross arrived. Business people brought water from the nearby offices and someone bought some juice for the children. Two KBOO staffers drove up in their Volvo and took us to Emmanuel ER. One of the protestors who had helped us from the beginning accompanied us to the hospital and waited with us until the kids were admitted (special thanks!). The children were examined for rhespritory problems and chemical burns. Luckily all were only suffering "normal" pepper spray reactions that have no treatment but to wait. The Pediatrician kept us a little longer so that she could call poison control to check for other recomended procedures as she had never in her career seen an infant pepper spray victim. 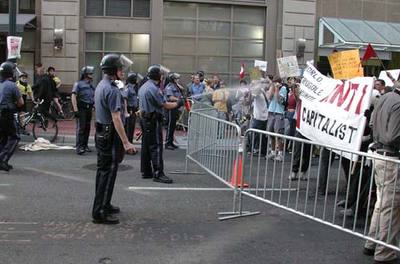 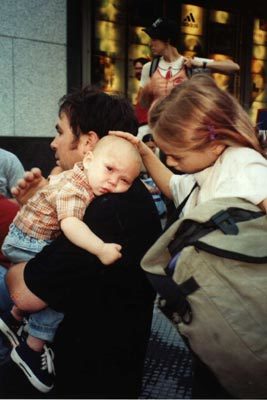 Plaintiffs allege that defendants intentionally applied pepper spray and shot rubber bullets at plaintiffs who were engaged in lawful protest activities. Further, the protesters were physically moved back from their peaceful positions, according to the Amended Complaint. In their supporting memorandum, defendants appear to contend that the Fourth Amendment is not offended by the intentional use of force that physically injures a citizen and only reduces his or her freedom of movement. If the citizen is able to walk or hobble away, according to defendants, no Fourth Amendment violation has occurred. However, as the Supreme Court has held, "The word 'seizure' readily bears the meaning of laying on of hands or application of physical force to restrain movement, even when it is ultimately unsuccessful." California v. Hodari D., 499 U.S. 621, 626 (1991).

Defendants admit that on August 22, 2002, the police physically moved the protesters approximately 120 feet in order to create a larger entryway to the street. Defendants used pepper spray and physical force to achieve this movement. Clearly the effect of defendants' actions was to control plaintiffs' movement. Additionally, certain plaintiffs assert that they were physically prevented from leaving an area cordoned off by the police. By physically moving certain plaintiffs and circumscribing the area of movement of other plaintiffs, defendants seized plaintiffs within the meaning of the Fourth Amendment. Construing the facts pleaded in the Amended Complaint as true, as this court must do at this stage in the litigation, plaintiffs have properly asserted claims for Fourth Amendment violations. Accordingly, defendants' Motions to Dismiss the third and fourth causes of action of the Amended Complaint are denied...

In contrast to Lyons, plaintiffs in this case specifically allege that it is the policy of the Portland Police Bureau to use excessive force against peaceful protesters. Notwithstanding defendants' stated policy to apply pepper spray only to unlawful protesters, plaintiffs allege that defendants in fact apply pepper spray and shoot rubber bullets at citizens who are lawfully exercising their First Amendment rights...

The Amended Complaint alleges a sufficient likelihood of future harm. Plaintiffs contend that defendants are engaged in a pattern and practice of using excessive force against lawful protesters. Amended Complaint ¶ 7.1-7.10. Thus, while the plaintiff in Lyons was unable to show that he would likely be arrested in the future and victimized by a choke hold, plaintiffs in this case are likely to lawfully protest in the future, thus subjecting them to defendants' alleged policy and practice of harming lawful protesters.

Marbet (and Joughin) vs. The City of Portland, United States District Court for the District of Oregon, Judge Haggerty, September 8, 2003, http://nlg.org/resources/massdefense/opinion%20and%20order%20on%20discovery%20rule%2012.pdf.

Last December, all of the plaintiffs save Marbet agreed to a $300,000 settlement with the city. They did not receive an official apology, although then Mayor Vera Katz said, "Mistakes were made. . . . You had to be blind not to see it." ...