People who are out of work but no longer looking for jobs aren't counted as officially unemployed.

Read that again. People who are so discouraged that they can't find a job and who have stopped looking for a job, are not counted as unemployed. They are officially referred to as discouraged or "marginally attached" workers by the government. It only follows that the government either considers these people as employed, or worse, as non-existent, both of which are a slap in the face for those people. Of course, these are real human beings. They still have to eat, and live somewhere, and consume from the economy. (Quote from above: [Breitbart](http://www.breitbart.com/article.php?id=D9BFJEQG2&show_article=1). Official government definition of U-6 (and the other U-s) [here](http://www.bls.gov/opub/ils/pdf/opbils67.pdf) and [here](http://www.bls.gov/opub/mlr/1995/10/art3full.pdf).) 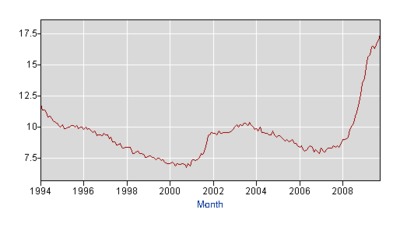