Starting in 1999, a worker was more likely to die due to a fall than a homicide, and more recently, a worker was just as likely to be killed by being struck by an object as being murdered by another human [bls.gov 3]. 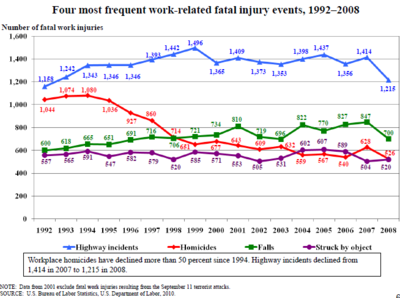 A similar and more robust analysis was done by the BLS in 2000 and found the same thing:

Taxicab drivers and chauffeurs face the highest on-the-job homicide rate of any occupation. In 1998, there were 17.9 homicides per 100,000 workers in these occupations, or about 36 times the risk among all employed persons...

The rate of fatalities among private police was 4.1 per 100,000; this was not significantly different from the rate among public police. Their similar risk reflects the similarities of duties.