A sudden cold snap had left the battlefield frozen, which was actually a relief for troops wallowing in sodden mire. Along the Front, troops extracted themselves from their trenches and dugouts, approaching each other warily, and then eagerly, across No Man's Land. Greetings and handshakes were exchanged, as were gifts scavenged from care packages sent from home. German souvenirs that ordinarily would have been obtained only through bloodshed – such as spiked pickelhaube helmets, or Gott mit uns belt buckles – were bartered for similar British trinkets. Carols were sung in German, English, and French. A few photographs were taken of British and German officers standing alongside each other, unarmed, in No Man's Land. 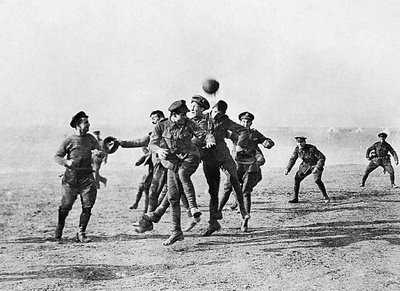 Near the Ypres salient, Germans and Scotsmen chased after wild hares that, once caught, served as an unexpected Christmas feast. Perhaps the sudden exertion of chasing wild hares prompted some of the soldiers to think of having a football match. Then again, little prompting would have been necessary to inspire young, competitive men – many of whom were English youth recruited off soccer fields – to stage a match. In any case, numerous accounts in letters and journals attest to the fact that on Christmas 1914, German and English soldiers played soccer on the frozen turf of No Man's Land.

British Field Artillery Lieutenant John Wedderburn-Maxwell described the event as "probably the most extraordinary event of the whole war – a soldier's truce without any higher sanction by officers and generals."...

"It was an amazing spectacle," Doyle reflected, "and must arouse bitter thought concerning the high-born conspirators against the peace of the world, who in their mad ambition had hounded such men on to take each other by the throat rather than by the hand."...

Scottish historian Roland Watson writes: "The State bellows the orders 'Kill! Maim! Conquer!' but a deeper instinct within the individual does not readily put a bullet through another who has done no great offense, but who rather says with them, 'What am I doing here?'"

World War 1 was probably the most brutal war in the history of humans. With 9 million soldiers running body first to die-- in a 19th century way-- into 20th century machine guns, the war accomplished nothing, sowed the seeds of fascism and communism which was to take many more lives, and engaged the United States in global interventionism, from which it would never look back.