The environmental Kuznets curve (EKC)... [posits] pollution at first increasing and then decreasing as income increases.

The initial reaction to Grossman and Krueger (1991) was a flurry of work both empirical and theoretical. Empirical confirmation of their provocative findings soon came from World Bank researchers (Shafik and Bandyopadhyay [1992] and Shafik [1994]). Using additional environmental indicators and more countries, these researchers found either an EKC relationship or monotonically improving environmental quality with income (with the exception of dissolved oxygen in rivers and CO2).

In the popular press, economic growth per se began to be touted as the answer to environmental problems (e.g., Bartlett 1994). However, this was not quite what Grossman and Krueger (1991) had said. They were clear about the nature of their assumptions and put in the usual caveats typical of careful researchers. They were particularly forthcoming about the fact that the reduced-form nature of their model limited the policy implications of their results. Still Grossman and Krueger (1996) felt compelled to reiterate these points again in a policy forum piece in Environment and Development Economics and to emphasize that “there is nothing inevitable about the relationship between growth and environment that has been observed in the past... Arrow et al. (1995) conclude, ‘economic liberalization and other policies that promote GNP growth are not substitutes for environmental policy’. We would agree. But we would go further and state that neither is the suppression of economic growth or of economic policies conducive to it a suitable substitute for environmental policy."

Grossman and Krueger (1991, 1995, 1996)... have clearly succeeded in changing the views of most economists, and the bulk of the empirical evidence supports them [on the points that] increases in income were not automatically associated with increased pollution [and] freer tradewould not necessarily make pollution worse.

On the main message taken from Grossman and Krueger’s work by the economics profession—that trade and higher income levels would make for a better environment— the supporting evidence is scant, fleeting, and fragile. 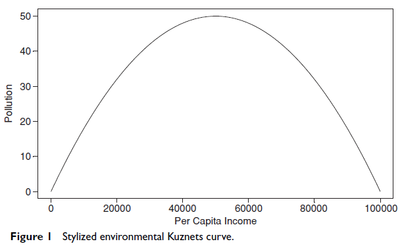 The work of Grossman and Krueger originally showed that pollution in the Soviet Union was worse than in the United states.