Day 3 for the R.V. I had big plans today, and they all fell apart... for the better. I planned to drive all the way to a state park near Montauk at the tip of Long Island- that way I could avoid NYC traffic when taking the R.V. back tomorrow morning. Oy vey, I have a new respect for truck drivers in NYC... Google maps also needs a "for trucks" feature.

After weaving around Brooklyn side streets for 10 minutes, nearly clipping who knows what with this massive thing, I finally see the sign for the alternate route! Whoops, also no trucks over 10'5". Uhhhh. I parked and fire up the laptop. It turns out parkways are not for trucks -- only express-ways. How could I be so dumb.

So, it was now 4 PM, and the alternate route taking major highways would take another 3 hours. Oof. So I started and I hit the next hurdle. Traffic was killer, and it was Stop & Go. As I was about to get onto I-278, the R.V. stalled! New York is the worst place to have car problems. People need any excuse to honk and scream to reach their daily quotas. I calmed down, gave it a minute and it started again! Yay. The engine probably just overheated from the Stop & Go movements. Then, not more than 3 minutes after that, I'm approaching I-278 and what do you know -- no trucks over 12'! AHHH, it's a friggin interstate highway! I pulled off onto Atlantic Ave and started searching for a parking spot to fire up the laptop once again. I drove around for a few minutes, and finally saw an opening... Pier 3 @ Fulton & Joralemon. This has to be one of the most awesome views of downtown NYC. I guess this is also where art goes to die, because the massive waterfalls they had underneath the Brooklyn Bridge were parked in a construction zone here. They were still flowing... to keep up the morale of the construction workers, I guess?

A nice little Indian security guard assured me I could park here, so I went off urban adventuring (pictures will soon follow).

The funniest thing was as I was walking down on the South side of the street, I saw a small light and pedestrian crossing. What was odd though, was that there was no sidewalk on the North side, just concrete. It turns out the massive concrete wall was a front to the subway, and this was an emergency exit. But why was the pedestrian crossing system necessary for crossing into a big wall? I guess it must trip if the emergency door opens? The funny part was that, as with all pedestrian crossings, there was a button on my side to push to turn the light green. BAHAHAHAHA! I pushed the button, and lo' and behold, the light turned green. Unsurprisingly, the cars stopped, like sheep, even though it was absolutely impossible for humans to be crossing there!

I miss being mischievous. 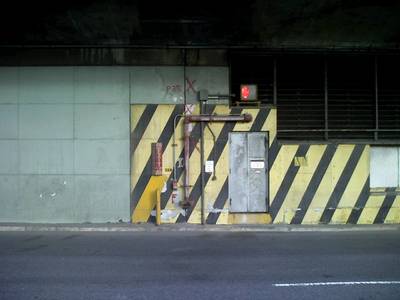