War is Poison or Poisson?

War is Poison or Poisson? 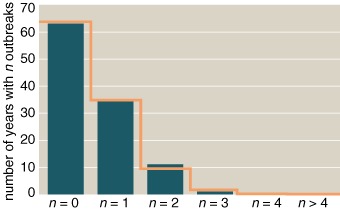 Frequency of outbreaks of war (blue bars) is very closely modeled by the Poisson distribution (orange line), suggesting that the onset of war is an essentially random process.

War deaths amount to about 1 percent of all deaths; in many places, more die by suicide, and still more in accidents.

...Thus the data offer no reason to believe that wars are anything other than randomly distributed accidents.

The existence of civil wars argues that living together is no guarantee of amity.

Richardson paced off the lengths of boundaries and coastlines with dividers... when Benoit Mandelbrot came across it by chance, Richardson's observation became one of the ideas that inspired Mandelbrot's theory of fractals.

Of 94 international wars with just two participants, Richardson found only 12 cases in which the two combatants had no shared boundary, suggesting that war is mostly a neighborhood affair... But extending this conclusion to larger and wider wars proved difficult, mainly because the "great powers" are effectively everyone's neighbor.

Richardson concluded that "chaos" was still the predominant factor in explaining the world's larger wars: The same element of randomness seen in the time-series analysis is at work here, though "restricted by geography and modified by infectiousness."

Richardson noted the various items that historians mentioned as possible irritants or pacifying influences, and then he looked for correlations between these factors and belligerence. The results were almost uniformly disappointing. The statistics ratify neither the idea that war is mainly a struggle between the rich and the poor nor the view that commerce between nations creates bonds that prevent war.

The one social factor that does have some detectable correlation with war is religion. In the Richardson data set, nations that differ in religion are more likely to fight than those that share the same religion. Moreover, some sects seem generally to be more bellicose (Christian nations participated in a disproportionate number of conflicts). But these effects are not large.

Richardson's data suggest that wars are like hurricanes or earthquakes: We can't know in advance when or where a specific event will strike, but we do know how many to expect in the long run. We can compute the number of victims; we just can't say who they'll be.

Even if Richardson's limited data were all we had to go on, one clear policy imperative emerges: At all costs avoid the clash of the titans. However painful a series of brushfire wars may seem to the participants, it is the great global conflagrations that threaten us most. As noted above, the two magnitude-7 wars of the 20th century were responsible for three-fifths of all the deaths that Richardson recorded.