Figure 36.1 shows that the workplace fatality rate began its downward trend well before the creation of OSHA [, the United States Occupational Safety and Health Administration, created in 1970]. The trend was fueled not by OSHA but in large part by improvements in safety technology and changes in the occupational distribution of labor, for example, away from more dangerous assembly line work to white collar service jobs... the vast majority of studies has found no statistically significant reduction in the rate of workplace fatalities or injuries due to OSHA.

In 1993 firms paid more than $55 billion for workers' compensation insurance and an estimated $200 billion in wage premiums to workers for accepting some job hazards. OSHA, both federal and state, assessed fines of only $160 million in 1993. At a ratio of 1,594 to 1, the economic incentives to improve safety by reducing compensating wage differentials and workers' compensation insurance expenses far surpass the safety-enhancing incentives of the relatively small fines imposed by OSHA for violating its standards. 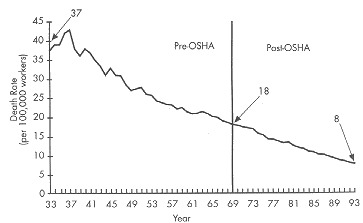