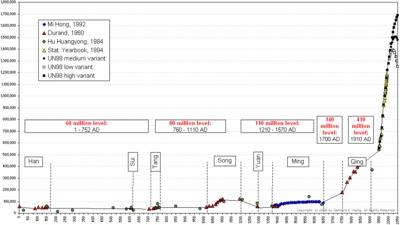 Notice the projected population declines in China around 2040 in the U.N.'s medium and low varients. This is in line with U.N. projections of the same sort for the world, caused mostly by lower-than-replacement fertility rates as standard of living increases.

In relation to China not being Capitalist:

Since the late 1940s, the state regarded long-distance trade as a speculative, capitalist activity and branded those involved as criminals. In the early 1960s, such traders were labeled as “bad elements.” Some lost their jobs or were sent to labor camps while others were put on neighborhood watch lists to be supervised closely. Even in the late 1970s and early 1980s, the sight of policemen chasing and confiscating a rural peddler’s goods was common.7 One Chinese entrepreneur compared his early business ventures to an untrained acrobat walking a tightrope: “I was excited about the huge market opportunities while scared to death of returning to a prison cell. I lived a life of constant sweat, sleepless nights, and thumping heartbeats.”8 Throughout the early 1980s, farmers in north Jiangsu packed their bikes with chickens, ducks, and other fowl, crossed the Yangzi River, and shipped their products by rail to urban centers in the Yangzi basin. “A million roosters cross the mighty Yangzi” was the expression of the day.9