Zimbabwe is the first country in the 21st century to hyperinflate. In February 2007, Zimbabwe’s inflation rate topped 50% per month, the minimum rate required to qualify as a hyperinflation (50% per month is equal to a 12,875% per year). Since then, inflation has soared...

Zimbabwe failed to break Hungary’s 1946 world record for hyperinflation. That said, Zimbabwe did race past Yugoslavia in October 2008. In consequence, Zimbabwe can now lay claim to second place in the world hyperinflation record books. 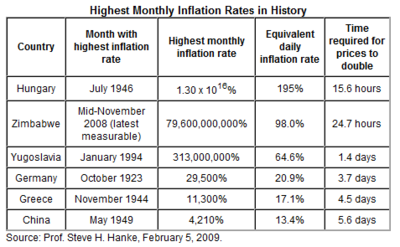